The Astrological Moon Back in Print 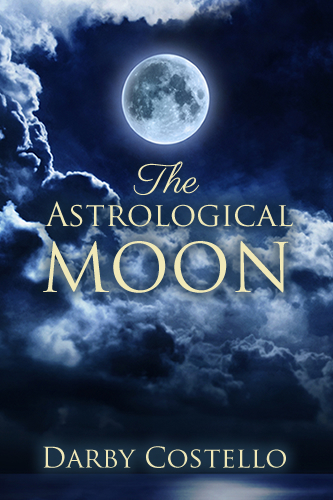 I'm pleased to announce the reprint release of my long out-of-print book The Astrological Moon, which has been hard to come by for some time.

About The Book
Throughout her astrological career, Darby Costello has been watching the progressed Moon as it moves through the signs and the houses of the birth chart. This book contains edited transcriptions from two CPA seminars - one exploring the Moon in its relationship to the natal Sun and the other exploring the progressed Moon, by sign and house, as it describes the unfolding of our emotional life which leads us to the awakening of our souls.

In addition, Darby traces the cycle of the progressed Moon as it interweaves with the Saturn cycle, marking moments where crisis and change become gateways to new dimensions of experience. These gateways bring past and future together, and provide openings to the points of intersection between time and eternity that dwell in each of us.

Darby writes, "The natal Moon describes the physical gateway through which each of us must enter if we are to have a life on this planet. So far no one has discovered another way to get onto this very colourful little planet, circling its own medium sized star. To spend any time here, as far as we know, you have to enter through a woman's body. And that woman's body will contain traces of every event that has happened since the very beginning . . . All of the past will be contained in that body . . . everything, going back to the birth of the universe."

Darby on the Progressed Moon

A Ficinian Response to Love in the Nineties: A Dialogue between an Astrologer and a Student

Originally Published in Sphinx, Journal for Archetypal Psychology and the Arts London, 1993, Volume 6

SYLVIE: Vita, hello! How unexpected to see you here in this café in the middle of a rainy Friday afternoon. I didn't know you lived in this area. But I won't intrude as I see you are working on something.

VITA: Not so much working as musing. Please sit down and join me for a coffee. How have you been? We last met at Erica's dinner, I think. You were with that interesting Russian man.

S: Yes. I was. No longer, I might add. This business of falling in love. I wish I could stop it happening. I begin to think it is some kind of trick. I fear that there is something I must figure out or I'll keep getting tricked forever. Somewhere I hear the gods laughing -it's as if I keep missing the point; I don't know the secret. If only I could find the secret of this trick I'm sure I would be able to laugh with them.

V: Yes, wouldn't that be delicious! But what happens?

S: I seem to be caught in a loop and I have no idea how to break out. After the end of this last affair, in which I invested more of myself than even I imagined possible, I wanted to die. Day after day I thought of suicide, how I would do it, what it would mean to the various people I knew. For months I was numb with pain. I kept telling myself I was already dead, so what was the point of killing myself? There had to be another solution. Actually I remembered something you said once about the secret of love being only given to those who had faced death in some way. It keeps coming into my mind, so isn't it a fine coincidence that I've met you here, and today?

V: It is. Tell me more about this feeling of death.

Recovering the Garden of Venus

In the early sixth century a bishop from Padua wrote an epithalamium - a marriage poem - for a bride and groom. In this poem, Cupid went to see his beautiful mother, Venus, in her lush garden, complaining that their 'old empire' had been lost, and now 'cold virginity' possessed the world. 'Arise! Shake off your sleep!' he tells her. But she replies that she will not leave her garden yet; 'We shall be all the stronger for our rest. Let the nations learn that a goddess grows in power when no one thinks of her. (1)

In our world today it is not 'cold virginity' that has driven Venus into her hidden garden, but our ongoing anxiety and our terrible over-stretched busy-ness. And perhaps, underneath this, a loss of reverence for the invisible powers that the gods and goddesses used to personify. Today we ask each other and/or our parents and leaders to personify the gods and goddesses we have lost. Not only do relationships suffer but also our human capacity to take pleasure, soul nourishing pleasure, in the beauty of the world as it is. The longing for things to be different, people to be different, ourselves to be different, seems to be a disease of the time we live in.

In my consultation practice as an astrologer I have sought to understand this sense of collective distress in myself and in others and to bring it into consciousness rather than be submerged by the communal free floating anxiety, which most often gets projected onto one or another person, group or community. We are in such a precarious, changing world and it feels so unsafe to so many people. A lot of the work I do with clients involves noticing where these distressed, anxious, busy, thoughts, images and feelings invade the private gardens of our lives. Do we pay appropriate attention to the beauty that is Venus' gift as it shows in our charts? Do we relate personally to the dimension that is her realm in ways that further joy and beauty in our lives and in the world around us? And, is this a thing worth doing, or is it selfish in a world full of such confusion and distress?

The Uranus-Pluto Generation
by Darby Costello

During the late 1980s students who had been born in the mid-sixties began arriving at the CPA. I had been looking forward to meeting this group with their potent Uranus-Pluto conjunction with Neptune in Scorpio. This configuration had begun to intrigue me since I was now beginning to come across it in the charts of people who came to consult me. They were either in the middle of their Saturn return or approaching it and although over the years I had seen thousands of people through their Saturn returns and remembered my own with its tensions and crystalisations, this generation was expressing a very different order of tensions and developments. There was another reason this group intrigued me; they were born in the sixties, and those were the years when my generation was young, and having a most extraordinary time.

One Sunday, standing around with some students after a seminar, we began talking about the sixties. I was regaling them with tales of that time, when we suddenly realised that the six people I was talking to had all been born in the sixties and they all had the Uranus-Pluto conjunction in opposition to Chiron. It emerged that they were born over a five year span, with Saturn in Aquarius, Pisces and Aries. One of the group said that he had the Uranus-Pluto conjunction in the tenth opposite the Saturn-Chiron conjunction in the fourth and both squared Sun in Gemini in the eighth house. He thought it ironic that sex had become so dangerous for his generation, as they had been born into a decade of such sexual freedom. He also said, "You had something to rebel against - your generation spoke out continually. There is so much wrong today, but I think we are afraid to speak out for some reason - though we feel the weight of the world's sorrow very much."